Today's run consisted of what I like to call a half-baked idea to celebrate National Pi Day - March 14.  With a couple of co-conspirators by way of running friends, the Slice O' Pi Run was born.

At 9:30 this morning, I met up with my friends Ann and Paul at a local Perkins restaurant. As Ann was shooting for π-squared, she already had 6.28 miles in by the time I arrived. Setting out at a jaunty pace, we covered a 3.14-mile course that was roughly shaped like a slice of pie.  I wouldn't say it was the best run for me. It was cold yet again with wind chills hovering around 0 degrees and sketchy footing from those who did not feel compelled to shovel after yesterday's snowfall. But, we did it, and once done we indulged in a real slice of pie and coffee at Perkins. 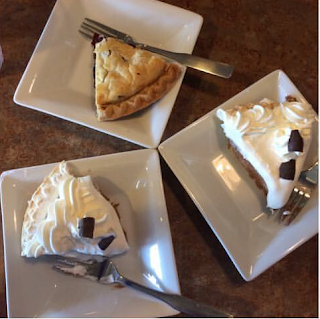 I can't say I remember the last time I actually ate at a Perkins, so this was kind of a novel thing for me. I ordered the Chocolate French Silk Pie, and it was definitely decadent. Ann and I were trying to figure out if this had fewer or more calories than the typical dark chocolate mocha we both have a tendency to order after group runs. While we didn't come up with a definitive answer on that one, my guess is the pie was a bit more caloric. Maybe I should have run π-squared, too.

Having Pi Day fall during this week was actually fairly fortuitous for me, as I had previously decided to dedicate my entire week to the noble three-mile run. Actually, I need a down week after several weeks up...my running calendar's built-in weekly mileage tracker (in graph format) made me realize that. 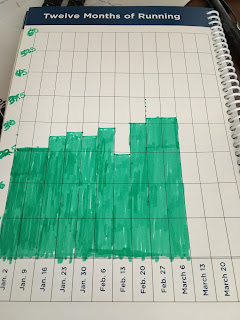 Since I have yet to have a day in my now 111-day running streak where I dip below three miles, a down week for me looks like this:

There is one thing standing in the way of me having a 21-mile week this week, though, and that is my 10-mile event taking place this next Sunday. Since I log my miles from Monday to Sunday, 10 miles on Sunday means that I'll still have 28 miles for the week, even if every other day is a three-miler. Huh. So, I am playing with the idea of trying out a mini-taper. To accomplish that, leading into the race I would plan to run only two miles on Friday (perhaps then walking one mile) and running one mile on Saturday (perhaps walking two miles). Then at least I could claim I only ran 25 miles this week. I like this idea in principle, but I'm not sure yet if I'll follow through. One thing is clear, though, it is time to do a bit of a rest, so one way or another I'll work that in.

So, that's my homage to Pi Day ... a 3.14-mile run followed by a slice of pie. Oh, but then there is that one other thing. I felt so bad that my family might be left out of these Pi Day shenanigans that I went ahead and baked an apple pie.

Do you like how I made that all casual sounding? Yeah, this is probably the second or third pie I have ever baked in my life, so its creation came with much strewn flour, gnashing of teeth, and referencing of about six different websites. But, it got done. The best part was picking up my daughter from school and having her tell me all about how it was Pi Day and how it would be funny to bake a pie that had the pi symbol on it. Uh-huh. When we got home and I had her look at the finished product, her response was simply, "Great minds think alike." Yes, I guess they do. 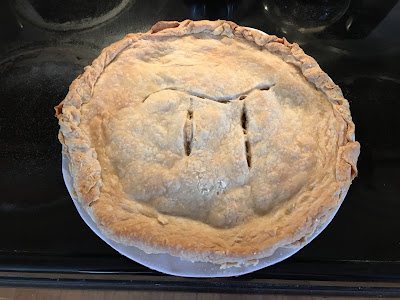