A small celebration of 12 miles in the cold

So, as far as the weather was concerned, today's 12-mile run was exactly like last week's 12-mile run. Lucky me. After a week of mild albeit windy days, the temperature landed at about 15 degrees with a wind chill at about 3 degrees. Huh. Well, at least it wasn't below zero!

Setting out today, I fancied myself rather clever in my planning. Instead of running with the wind to my back for the first half only to circle around to a headwind for the last six miles like I did last week, today I decided it might be smarter to actually run into the wind on the way out and then have a tailwind on the way back. I know, sometimes I'm smart like that. As it turns out, even though the wind did skip around a bit on me, this was the better way to go. And, the bonus of running into the wind was that I knew within a couple of miles that I had dressed inappropriately for the weather.

How is that possible, you ask? After all, you might remind me, today's weather was just like last week's weather. Well, let me explain. Last week I was dressed all but perfectly for the weather conditions, with the lone exception of my arms when I headed into the wind. That tiny bit of corporal real estate had been a bit chilled. Being the aforementioned clever person that I am, this week I decided to adjust for that. So, I added arm warmers. Brilliant, right? Yes. But, then, because that seemed too easy, I proceeded to add a hoodie, another pair of gloves under the other gloves I had worn, and a vest. Apparently, I was under the impression that if something's worth doing, it's worth overdoing. Yeah, I was a bit warm. On a positive note, my arms were fine.

Anyway, in the end it felt good to get this run done. I had been skeptical of adding another 12-miler a week after my last one, but it worked out. To adjust for wind direction, I parked at a local library, ran six miles into the wind to a friend's house, and then we ran back to my car together. That second six miles passed by much more quickly than my first six miles. Maybe it was having someone to talk to - or maybe it was the wind at our backs. You can be the judge, but my money's on the conversation. In any event, I was happy to get back to my car and then reward myself with some coffee and a muffin from a conveniently located coffee shop a block from the library. 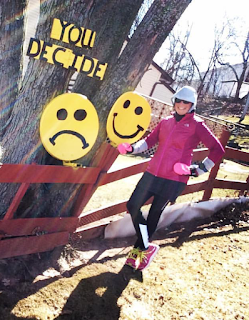