Monday is my rest day. The end.

Haha, just kidding! If you are reading this, you aren't getting off that easy.  No, actually, today IS my rest day, and for that reason I don't want to blow my few precious hours alone on the computer, so I was trying to come up with a cool title for a this and that post - like you see on other blogs. I wanted to come up with some cool spin on Monday using the magic of alliteration, but that didn't work out so well for me.  Maybe because it's Monday, but my brain wasn't firing on all alliteration cylinders.  So then I was thinking Monday Madness, Monday Mayhem, yada, yada, yada, but those weren't doing it for me either.  So, finally, I settled on something that I love but of course no one else would understand...Monday Mischung.  Mischung being the German word for "mix."  (I suppose I could have done Monday Mix, but oh well too late.)

Anyhoo, and without further ado, here is my Monday Mischung.  A grab bag of thoughts and happenings, as spewed out by moi.

First of all, it's -9 degrees here.  Yes, nine BELOW zero. And, that is air temperature.  With wind chill it's like -20 or something.  And tomorrow is going to be colder with morning wind chills dropping to about 50 degrees BELOW zero.  There isn't too much more to say to that.  If you are reading this from the same neck of the woods as I am writing it, then you know what I am talking about.  If you are reading this from somewhere warmer, quit your belly aching about whatever temps you have right now and be thankful.  Because, frankly, I love winters, but there is nothing like a freeze-your-boogers, get-frostbite-in-five-minutes type of temperature to make you appreciate ANYTHING else.

So, I have recently heard of people putting butter in their morning coffee. I am not sure what that is all about, and I don't care since it is nothing I would ever do.  But then I heard of others putting coconut oil in their coffee.  Now you're talking my language. We happen to have two jars of that lying around the house.  Typically, we use it for cooking, although lately I have been experimenting with using it as a skin lotion.  (I am having so many dry skin issues and nothing seems to help.)

Anyway, I thought I would try it this morning.  The conclusion?  Not sure.  I still have a really hard time purposely adding fat into my diet.  I mean, I don't eat low-fat by any means, but I don't go out of my way to add it in either.  I added all of about a half of a teaspoon to my cup of coffee, and I can't say that it really impacts the taste much.  There might be a bit more richness of flavor, but that is a might.  A definite con to this is that I am a little turned off by the globules of fat floating on the surface of my coffee.  (There is nothing that says good morning like drinking a steaming mug of oil slick!) 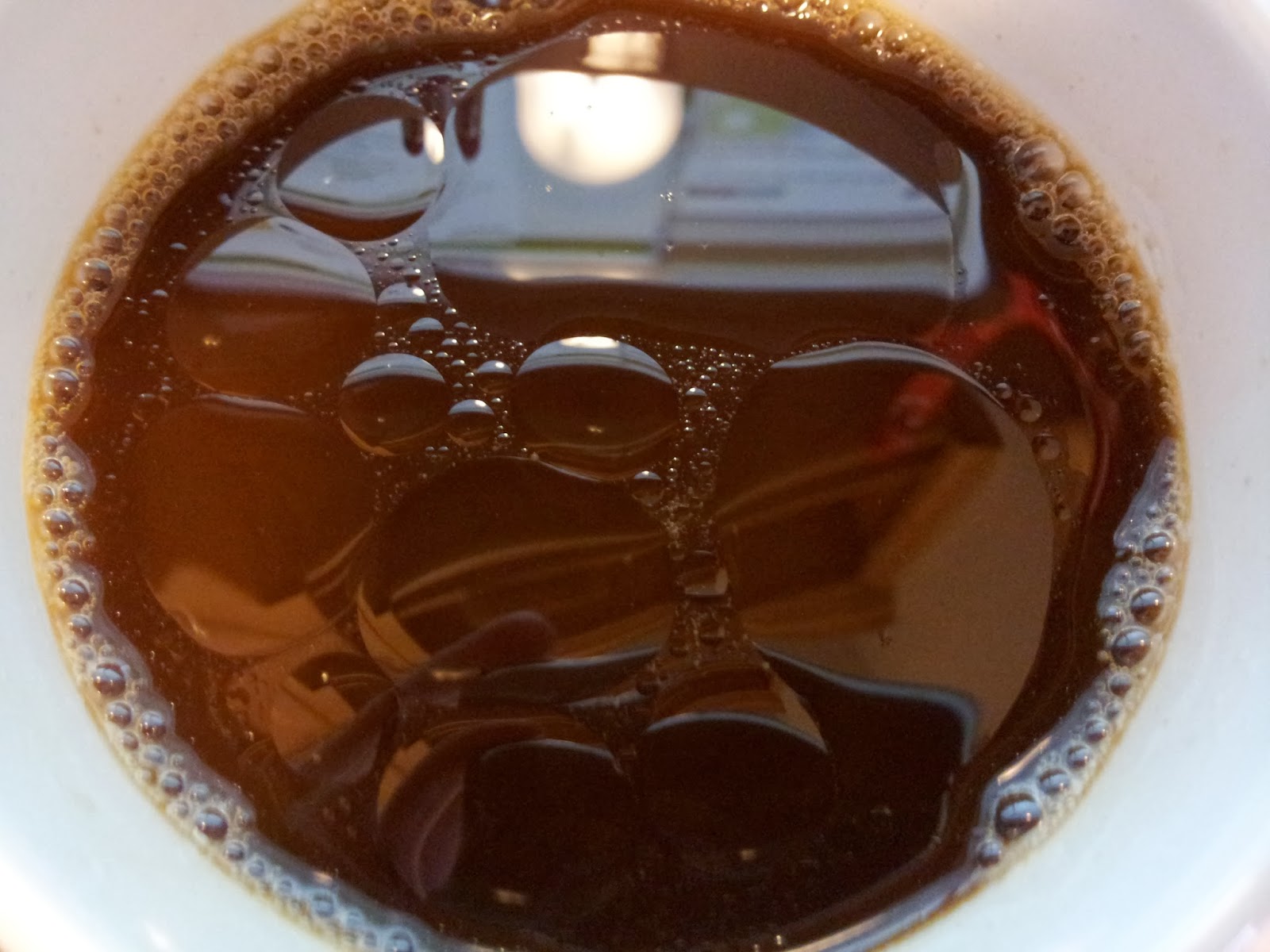 Not to be completely negative, though, on the positive side I don't feel like I need to add any Chapstick this morning.

What can I say about this?  A cousin of mine recently celebrated her birthday by going to drag queen bingo with her friends.  Although I love where I live, there are just times when I wish we had some more goings ons in the area.  It's not every day you get to go to drag queen bingo.  And if you are living here - it's not ever.  I am missing out on some of life's truly must-do experiences.

After an entire lifetime of not eating pomegranates, this winter I have discovered this wonderful fruit and embraced it wholly.  Ever since learning how to whack the pomegranate arils out of their husks, I have been adding them to my morning oatmeal.  We are talking weeks now that I have been doing this.  Alas, it seems that pomegranate season is coming to a close, because I have been to three grocery stores in the past week and none has the fruit.  There is still one place I have to try, but if they don't have them, I will consider poms out of season.  Since running out of pomegranates I have been adding two little Halo oranges to my oatmeal and that's not half bad either.

I am on Day 18 of my Wellness Project Challenge to eat a rawish lunch every day, and I am doing okay.  I have blown it two days out of the 18 - the one day being while we were on the road to Milwaukee and the second day when I couldn't pass up leftover soup - but otherwise I have eaten either a large salad or had smoothies for lunch.  I don't know if I feel any healthier for doing this, but I do enjoy the happy feeling I get from thinking I am making a good choice.  If nothing else, these past weeks have taught me how to efficiently make a salad that lasts a few days.  Seeing as it was always the making of the salad that kept me from eating them, I think I may be over that now.

To illustrate to you how little of a life I have, let's talk tv.  I hardly ever watch television. In fact, we don't even have cable.  However, last year, I got hooked on Downton Abbey at the start of season 3.  I don't know why I started watching it, but everyone was talking about it, so I had to see for myself.  Now, every Sunday night, you will find me snuggled into the sofa with a glass of wine and the tv all to myself. (The husband flees the room to read elsewhere.)  Now, if that weren't bad enough, out of curiosity, I started watching Sherlock last night (I recognized the actor from Star Trek: Into the Darkness), and now I think I will be watching that as well.  Strangely, Sherlock is starting season 3 this year.  I guess I have to let shows mature for a couple of years before I'll watch them.  Anyway, I really enjoy these Sunday nights and will be sad to see the seasons come to an end.

I am still not running. I haven't run a step - again - in about one and a half weeks, and it has been officially over two months since my IT band stopped functioning properly.  I have to say, though, that I am okay with it all.  I am taking on the heart-rate-monitor return-to-fitness approach and it's all good.  In fact, I should have realized at the end of last year - when I was having such a difficult time coming up with goals for myself in 2014 - that I needed a break.  Obviously, this is my body's way of giving me one, so I have decided to go with the flow.  I'll get back to it. I know I will.  However, I want to be running ultras until I am 100 years old, not have a brief but furious career.  Also, I have suffered a lot of injuries in the past few years, and by all accounts (I have had THREE running analyses done) I am a very efficient runner.  So, it's time for me to break the cycle now.  I don't want this injury better. I want it GONE, and I am willing to do whatever it takes to do that.

So, I have settled into a routine of walking on the treadmill and rowing, alternating between the two for six days out of the week.  I do both within my fat burning HR zone.  I do PT exercises every other day and yoga once or twice a week.  If I can get out and xc-ski, then I throw that in there as well.  Mondays are my rest days.  I have only been doing the HR thing for about a week now, so I am ever hopeful that as my base fitness improves I will be able to move up into slow running.  But, as stated before, I am going to keep at this as long as it takes to feel like I have really made a difference in this injury.  I am not going back into running with this "on the mend" or "lingering."  This time it has to be gone.

Feeling better, but not gone.  This past week has been brilliant.  I noticed the leg acting up after the Samson Stomp last Sunday, but since then I haven't felt it get wonky at all. Occasionally I do notice tightness, though, so I know it is still there waiting in the wings.  Patience is my friend right now.

Happy Running!
Posted by Shannon at 10:43 AM